This morning I read something that made me realize it’s time to stop beating around the bush in the discussion of education reform.

The reason right-wing Republican politicians love the education reformies - Michelle Rhee and her lot - is that they don’t place uncomfortable demands on society to confront not just the existence of poverty, but even more importantly, the segregation of poverty. Charter schools in poor urban areas, vouchers, school turnaround, tenure reform - they are reforms that keep the poor people right where they are - just shuffle ‘em around a bit and shake up their schools, safely within the confines of their own poor, urban neighborhoods.

And that suits right-wing politicians very well, because they’re busy pandering to suburban voters who are terrified of the prospect that their insular, white enclaves might be invaded by the dreaded other. I’m talking about the kinds of suburbanites (by no means all) who see the Mt. Laurel affordable-housing decision as some kind of socialist plot to redistribute the wealth perpetrated by a liberal elite by means of activist judges who  are really puppets of the International Workers Party. Sadly, there are still far too many people in New Jersey who don’t want THOSE people anywhere near MY house, MY school, MY family.

Most politicians are too savvy to come right out and say so, of course. Except for this guy from (aptly enough) Nutley, as reported in Blue Jersey:

Steve Rogers, who ran unsuccessfully last year for Essex County Board of Freeholders on a "too much government" platform, is one of the candidates for commissioner in Nutley...
A mailer received by most residents of Nutley in Essex County states several of Rogers positions using a combination of scare tactics while emphasizing his long career as a police officer. (Translation : the boogie man is going to get you and I'm the white knight to save you.) Made to look like a newspaper under the title "The Nutley Review" a banner headline proclaims "Controlling Property Taxes is Priority #1 For Rogers". ...
Alongside a stock photo of a foreclosed home, "Rogers Vows To Fight New State Low Income Housing Law." And it's here that we see Rogers toss handfuls of misinformation to cast a troublesome light on "the other" in an attempt at a power grab.  The low income housing law being considered will make use of some otherwise vacant houses and make them available for low income families. ...
Five paragraphs in, and dead center in the article, Rogers makes the point that low income families "include ex-criminals, the homeless, persons with AIDS-HIV, and those over 18 no longer eligible for foster care."...
The blow up quote at the bottom of the Rogers mailer reads "Hard working residents, who have spent their lives working to win and maintain a home will see the value of their house drop through the  floor when convicted drug dealers, thieves, and violent offenders move in next door."


Get the idea? The scary urban poor are coming to get you!

Of course, the truth is that building affordable housing is a great solution to a host of problems and, when done correctly, does not have an adverse impact on the existing neighborhood, as demonstrated in a recent study of Mt. Laurel itself:


There is ample evidence to suggest that socioeconomic integration is a more successful method of education reform than anything the reformies are pushing. It’s just that, politically, it’s a much harder sell. Sadly, on the right, where pandering to tea-party paranoia has become standard procedure, the defend-in-place doctrine of education reforminess is the perfect solution. It lets right-wing politicians make noises like they care about kids, education, poverty, etc - without doing anything that might piss off their hardcore voter base. Everything they want to do -- charters, vouchers, high-stakes testing, tenure reform -- can be seen as part of a policy of containment, measures that do nothing to shift populations or change the underlying demographics. In other words, these measures keep poor black and Latino kids right where they are - Newark, Camden, Paterson - and way the hell away from the Republican voter base.

Christie likes to defend his reformy education policy by saying that “destiny should not be determined by zip code.” He and his buddies accuse opponents of reforminess of using poverty as an excuse for educational failure. But the Christie-Rhee brand of reform, which addresses only in-school factors and not the problems of the isolated, impoverished communities those schools serve, is like building a skyscraper on a foundation of sand. When the building falls, who in their right mind would hesitate to blame the sand?
Posted by Tamar Wyschogrod at 11:42 AM No comments:

35 Years Before The Big Bang Theory

UPDATE: A million thanks to my old friend Naomi, who brought to my attention that James Wolcott's original article on Star Trek fandom is in fact online right here. As I said to Naomi, Wolcott was an even bigger dick than I realized back then. His reductive condescension and dismissive misogyny is - well, icky.


Originally written a few years ago:


I am more than a little verklempt.

Today I was looking through a folder of my stuff that my parents had given me several years ago -- mostly report cards, high school papers, school play programs, you know the kind of stuff I mean. So I'm turning the pages, and suddenly, there in front of me is a little piece of my personal fandom history that I thought was gone forever.

It's a letter to the editor of the Village Voice (at that time a widely read alternative New York weekly, for those who don't know) responding to an article about a Star Trek convention I'd attended -- one of the earliest. The letter was published February 23, 1976. I was barely 14, and amusingly enough I called James Wolcott, now culture critic for Vanity Fair and a writer for the New Yorker, a Klingon spy. He did not have kind words for Star Trek fans, and in all my youthful earnestness, I gave him what for. I wish I had a copy of his article, but I'm afraid that really is gone for good.

Better yet, I even found a photo taken about a month later of me posing proudly in my room in front of the posters and photos I'd no doubt acquired at that same Star Trek convention. I look exactly like the kid who would have written the letter.


Dear Editor:
I was shocked by James Wolcott's article, "Big Brother is Trekking You," (Voice, February 2). I find it hard to believe that anyone can so thoroughly miss a point as he has.
Mr. Wolcott is correct in noting that kids (and adults) at Star Trek conventions are serious but he fails to realize why. Star Trek deals with many real problems, and says that we can handle them. This is a message which drives home to today's youth. While the rest of the world doesn't know if it will survive, these kids believe that we can overcome our problems and differences.
I also refuse to believe that the bases for Star Trek's popularity are "sex, cool, and technology." Do thousands of fans come to a convention only because they enjoy playing with gadgets? Are all those women fans because Captain Kirk turns them on? Do thousands of kids watch the show faithfully solely because they envy Mr. Spock's cool? I find it difficult to believe that all those people of all ages and all walks of life completely miss the messages of a show in which a monster who attacks men is really only protecting her children; in which the racial problems of a planet are overcome through rational thinking and many other such episodes. And why should the cooperation of two men such as Kirk and Spock be macho when they are in fact serving the interest of peace?
I have found that many critics of Star Trek, including Mr. Wolcott, look only at the fans instad of at the show itself. How can anyone understand Star Trek fandom without examining Star Trek?
Mr. Wolcott must be a Klingon spy. 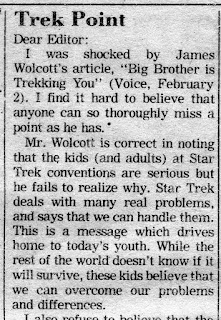 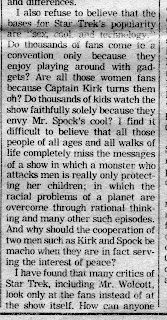 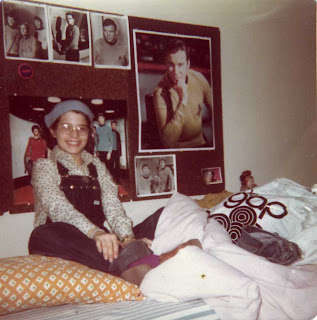 Posted by Tamar Wyschogrod at 8:54 PM No comments: