More on morons in Oregon (and elsewhere)

In yesterday’s post about the occupation by “militiamen” (aka domestic terrorists) of a wildlife refuge in Oregon, I hit the “angry white man” theme pretty hard. In thinking about their motives, I wondered, “What’s it like to be terrified to find yourself part of a society that is no longer dominated by straight, white, Christian men?” And I connected their belief system to the kind of extreme pro-gun, anti-government rhetoric we hear all too often from ideologues who preach American exceptionalism and a kind of nostalgia for a white America that never was.

It occurs to me that some might question that. I mean, why make this about race, right? Why do liberals have to keep blaming everything on white privilege? Sure, armed men occupying federal property over a land dispute might be really messed up, but what does that have to do with white privilege? You can’t just assume these guys are racists, can you?

That’s debatable. I mean, think about the extraordinary sense of privilege required to actually believe that, while non-white people all over the country are peacefully protesting economic and racial injustice, your cattle-grazing and land-burning rights are worth starting a shootin’ war over.  But luckily, we don’t have to extrapolate white privilege. These yahoos come right out and address race head-on, given half a chance -- and it’s not pretty.

Cliven Bundy, whose own run-in with the feds over land use put these guys on the media map, and whose son is one of the lead yahoos in the Oregon debacle -- and who, by the way, still has not paid the more than $1 million in fees and fines he owes, and whose cattle continue to graze on federal lands -- has spoken about driving by a public housing project in North Las Vegas and seeing "at least a half-dozen (black) people sitting on the porch, they didn't have nothing to do....Because they were basically on government subsidy, so now what do they do? They abort their young children, they put their young men in jail, because they never learned how to pick cotton. And I've often wondered, are they better off as slaves, picking cotton and having a family life and doing things, or are they better off under government subsidy? They didn't get no more freedom. They got less freedom." (source)

Yep. People like Bundy pine for the good ol’ days, when slavery gave black people a clear idea of their place in this world.

But surely, that kind of thinking doesn’t fly on the more liberal East Coast, home of New Jersey state Assemblyman Michael Patrick Carroll, whom I quoted urging Americans to arm themselves against potential government tyranny and to stand willing to shoot at soldiers should the (ill-defined) need arise. Well, apparently it does fly if you live in affluent Republican enclaves like Morris County, where, I suspect, the majority of voters don’t much care what a local politician says, as long as he promises not to raise taxes. The only national attention Carroll’s ever gotten was when he said this:

"If slavery was the price that a modern American's ancestors had to pay in order to make one an American, one should get down on one's knees every single day and thank the Lord that such price was paid." (source)

Once again, when it comes to black people, slavery is better than the alternative. Spot a pattern? Hint: The belief that slavery was a favor to black people, who otherwise would be lazy leeches in America or savages back in Africa.

Of course, neither Bundy nor Carroll would ever admit that their views on race, guns, and land are connected by their longing for an America where rugged (white) individualists live free (manly) lives, bearing arms to protect the land (that they took by force from the Native people who were there first).

Oh yeah -- I forgot to mention -- the occupied Malheur National Wildlife Refuge was once a Native American reservation. President Ulysses S. Grant established the Malheur Indian Reservation for the Northern Paiute in 1872; the Bannock War in 1878 ended with surrendered Paiutes and Bannocks on the reservation being removed and forced to move to Washington Territory. (source)

I feel fairly certain that the irony of this is completely lost on the angry white morons involved. 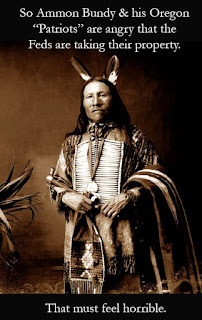 What's goin' on in Oregon?

Why do a bunch of angry white men out West see it as their right to take up arms against a democratically elected government? Why do they think their ideas on land use, or anything else, can justifiably be promoted at gunpoint? Where does such a staggeringly misguided sense of entitlement come from?

I wonder what it’s like to believe with the certainty of divine revelation that you’re supposed to be the top dog in the most powerful nation on Earth, and that anything less is a threat to the very order of the universe? What’s it like to be terrified to find yourself part of a society that is no longer dominated by straight, white, Christian men? I expect these are the feelings that have made the guys occupying a wildlife refuge in Oregon so vulnerable to manipulation by those who profit, both financially and politically, from gun culture, and to the dangerous rhetoric of ideologues who live in a fantasy world of American exceptionalism, rugged individualism, and white Christian privilege.

Who are these batshit, paranoid ideologues who promote the fantasy that accumulating a personal arsenal in modern America is exactly like the American Revolution, because TYRANNY, FORSOOTH!? Don’t they care that their paranoid rhetoric is routinely transformed by the people who swallow their crap into lunatic conspiracy theories about the government carrying out false flag operations to pave the way for martial law and concentration camps and such like?  No, this doesn’t seem to bother the mouthpieces of right wing extremism, probably because it serves their purposes to whip up fear and loathing in their core constituency. (Though I have to wonder, does it really serve anyone’s purpose to make people vote for Donald Trump -- other than Donald Trump’s, of course? But I digress.)

Anyhow, far be it from me to pass up an opportunity to flog my favorite hobbyhorse: that embarrassment of a politician who represents me in Trenton -- New Jersey’s own gun-lovin’, liberal-hatin’, Revolutionary War reenactin’, somewhere-to-the-right-of-Attila-the-Hun, extremist ideologue, Republican Assemblyman Michael Patrick Carroll. Because this speech of his is a great example of the kind of rhetoric behind what’s going on in Oregon.

“The American revolution would have been impossible were America not a nation of armed citizens. The framers knew that tyranny is always possible, even here, and that tyrants rarely go peaceably into retirement. A people who only stay free so long as they retain the ability to defend that freedom. Put simply, in America, we trust the people. We do not put the entirety of our faith into parchment barriers against tyranny. In many places throughout the world, throughout history, people lived in fear of their government. Our founders understood that prospective tyrants should live in fear of the people, not merely willing, but fully capable of defending that freedom. The idea that we are somehow safer if only folks who possess firearms, the means of defense, are armed bands of disciplined young men working for the government and trained to follow orders without question is so obviously delusional that it’s amazing that somebody could advance it in good faith....
"Let me ask you one simple question: If your neighbor cannot today be trusted with a firearm, how does donning a uniform change anything?  Now we are one of the very few nations in the world that celebrates a heritage of shooting at soldiers. God willing, no further poet will ever immortalize the deeds of private American citizens fomenting a successful revolution against a homegrown tyranny. But it behooves a free people to be prepared for that eventuality. We don’t celebrate firearms freedoms for their own sake, but for the legacy of freedom and independence that an armed population produced and will if necessary, defend. Firearms freedoms ensure that Americans will be governed, but we will never be ruled.”


Translation: Of course, we don’t want to shoot at our own soldiers, who work for the government and therefore cannot be trusted. But when -- ummm, I mean if -- we don’t like the government anymore, let’s not hesitate to occupy something and wave our guns around like idiots, ignoring the social contract, the rule of law, the principles of democracy, common sense, and any semblance of reason. With liberty and justice for all. Amen. 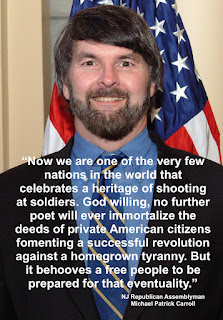 Posted by Tamar Wyschogrod at 12:55 PM No comments: