This Christmas without my dad

In memory of my father, Michael Wyschogrod.

Warning: Contains Doctor Who spoilers through "The Husbands of River Song."

Another Christmas, another Doctor Who special that seems to have been written for me personally.

After last year’s special, I was moved to write about my own situation. I was staying with my father, who was deep in the throes of advanced dementia, while my brother and his family were away. No longer safe on his own, Dad had been living with my brother and his wife, empty-nesters, for about six months. We are Jewish and don’t celebrate Christmas, so my brother had planned a much-needed and well-deserved vacation; rather than drive my father four hours to my house, which would have been very disorienting to him, I went to my brother’s, where Dad was settled in and had aides to help him nearly 24/7.

“‘Do you know why people get together at Christmas?’ [the Doctor] asks her. ‘Because every time they do, it might be the last time. Every Christmas is last Christmas.’
“A lump swelled in my throat. Surely, this is my last Christmas with my father. It makes no difference that Christmas is just a date on the calendar for us. Whatever the coming year holds, I don’t think there will be even a glimmer of my dad left by next December 25.
“Is there anyone my age who heard that line and didn’t react the same way? Anyone of any age who has felt the sting of loss, or who knows he or she soon will, who didn’t shed a tear? We mark the turnings of the seasons, the year’s end, the milestones, with gatherings of friends and family because, for each of us, there will be a last one. It’s not a truth we generally speak aloud, but we all know it.
“‘Last Christmas’ is about the nightmare of dreams within dreams within dreams; about not knowing the dream from the reality. In the end, the characters are returned to their own realities – awakened -- by Santa Claus and a Time Lord, as absurd and unlikely a pair as any you could dream up. But of course, it doesn’t end there. There is one last awakening. I turn off the TV; Santa and the Time Lord disappear, and I am back in my niece’s old room in my brother’s house, with a father who is with me for one last Christmas.”


You can read the whole piece here.

My father died on December 17, 2015, a week before the next Christmas. I watched this year’s Doctor Who special the day after getting up from shiva, the traditional weeklong Jewish period of mourning, which we observed at my brother’s house. I spent the week sleeping in the bed my father had occupied the previous year; eating at the table where I’d given him his meals; greeting visitors in the living room where we had sat together in his quieter moments. Last Christmas had indeed been my father’s last.

It was a long, sad year with my dad, predictable as it was. In the first half of the year, his delusions, confusion, and agitation had grown steadily worse, even as his strength declined and he became less and less steady on his feet. The demands on my time from my own family meant I could only visit Dad about once a month, and so the change from visit to visit was obvious and painful to see. Then, at the beginning of the summer, he came down with pneumonia and was hospitalized. Realizing it no longer made sense to try to care for him at home, my brother and I decided to put him in a nursing home. We felt guilty and awful. In the home, his decline accelerated, which made us feel even more guilty. In the last couple of months, he was difficult to rouse; he spoke little; it was hard to tell how much he understood. We felt that the brilliant man who had always been such a powerful force in our lives had departed long before his body finally shut down for good. When the doctors told us it would just be a matter of weeks, my husband and I brought our three teenage kids to see him one last time. That was on a Sunday. On Thursday, he died in his sleep.

Last year, I wrote, “It’s a funny thing about Doctor Who lately: It’s a family show that often seems to be speaking more to the adults in the room.” In season nine, that’s been more true than ever. Steven Moffat has a gift for transforming a fanciful premise into a poignant tale about a lot of very un-childish things, and the twelfth Doctor, as played by Peter Capaldi, is the perfect vehicle for such tales. This is a Doctor who is decidedly not in the business of candy coating harsh reality; who expects joy to come mixed with equal parts sorrow; who rages against the inevitable, and then accepts it as the bitter pill it is.

It feels to me like Steven Moffat, who wrote the last two episodes of the regular season, “Heaven Sent” and “Hell Bent,” as well as the Christmas special, “The Husbands of River Song,” is writing from a place of sorrow tempered by an innate ability to see dark humor in everything and a stubborn refusal to give up on the idea that, if we’re very clever and very lucky, we can find joy and love along the way.

The character of Ashildr is the embodiment of the idea that if you live long enough, life’s suffering will become your constant companion, and that if one is to know joy, it must always be in admixture with sorrow. When you get right down to it, there’s no denying that, looked at one way, the Doctor did a terrible thing by giving Ashildr immortality. If pain is inevitable in life, then endless life inevitably brings infinite pain. But then, one could condemn anyone for bringing any sort of life into this world, and what would be the point of that? Life may be a bitch, but it’s all we have. The alternative is nothingness, and that is truly terrifying.

Which brings me to Clara. We’ve watched her heading toward her inevitable end ever since she first showed up. Her character actually starts off by dying a couple of times. That doesn’t bode well. So when we find her fate finally sealed in “Face the Raven,” it hardly comes as a surprise. And then comes “Heaven Sent,” which is mind-blowingly, devastatingly sad and painful, as the Doctor faces a trial that lasts a near-eternity, with none but his remembered Clara to keep him company and help him through.

What a poignant way to capture just what I felt as my father slipped further and further away, and I superimposed on his fading presence my own vivid sense of who he was and what he’d meant to me over the years. My remembered father, who taught me the “duty of care,” as the Doctor put it, guided me when it all got to be too much -- when I was splitting my time between my three endlessly needy teenage kids and my increasingly confused, delusional father, especially when he was in an independent living facility an hour from my house, and I was trying to manage his wandering episodes, his inability to manage his medication, his persistent delusion that every older woman he saw was my dead mother, his near-total loss of sense of time. I found myself in a surreal world, my own personal confession dial where, at first, day after day I broke it to my father anew that his wife was dead and that he couldn’t be seeing her, and eventually gave up and invented stories for him about where she was and why she kept appearing and disappearing. And all the while, I could feel death stalking the poor man, ever since a neurologist diagnosed him with Lewy Body disease and said, “There’s only one way this goes.” Don’t try to tell me Steven Moffat wasn’t thinking of me when he wrote the story of the Doctor trapped in the confession dial. I know better.

Then come “Hell Bent” and “The Husbands of River Song,” and we see the same thing happen twice: A beloved character heading for certain death gets an extended reprieve during which she gets to do exactly what she wants. For Clara, it’s her own Tardis and all of time and space; for River, it’s quiet years (one Darillium night) with her beloved Doctor, with no crises, no running, no apocalypses. What a lovely fantasy. It’s all my if-onlys come true: If only I’d been more accepting of our differences when I was young; if only I’d been more understanding of his faults; if only I’d spent more time with him when he was well; if only we’d traveled more together; if only I’d read his books and asked him about them; if only I’d written down all his stories; if only I’d brought the kids to see him more often.

If only we had more time.

The ending of “The Husbands of River Song” feels bittersweet, because of course I don’t get the fairy tale, the extra time, the reprieve. Memory and legacy are all well and good, but the finality of my father’s passing is unrelenting. I will wake up every morning for the rest of my life to the reality that he, and my mother before him, and others I’ve loved, are gone. Someday, my kids will do the same with me. Eventually, we will all mourn, until the time comes when others mourn us. But we’ll also take some comfort in stories about rescues and reprieves -- stories that move us all the more when they rest, as Moffat’s do, on a profound understanding of the psychology of grief and loss, and the very human urge to deny the inevitable.

“The Husbands of River Song” made me laugh (“Does sarcasm help?” “Wouldn’t it be a great universe if it did?”) and it made me cry (“When the wind stands fair and the night is perfect, when you least expect it, but always when you need it the most, there is a song.”). When all is said and done, we’re left with the songs and the stories that live in the nexus between past and present, memory and experience. As we sat shiva for my father, my brother and I repeated the stories of our father’s life over and over, and showed the pictures and documents that prove that, yes, the man was real, the stories are true.

And they’re all we have left.

I think perhaps, when I’m thinking about my father, and my mother, and all the if-onlys -- when my own mortality is pressing in, and I feel trapped in my own confession dial -- I’ll watch “Last Christmas” and “The Husbands of River Song” again. Maybe they’ll be the songs I hear “when the wind stands fair and the night is perfect.” Or maybe something else will be. But anyway, I’m grateful to Steven Moffat for creating lovely bits of fluff that tap into such a deep, vulnerable place and somehow make grief a little more bearable. I’ll end with the exact words I wrote a year ago:

“It’s a funny thing about Doctor Who lately: It’s a family show that often seems to be speaking more to the adults in the room. But I guess that’s what happens when an old, old show about an old, old time traveler is taken over by a middle-aged fan. Steven Moffat grew up with Doctor Who; now Doctor Who is growing up with Steven Moffat.” 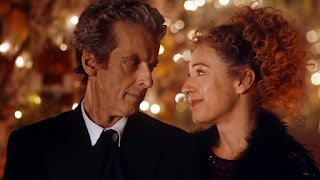 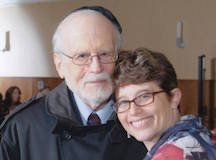 Posted by Tamar Wyschogrod at 10:17 AM 2 comments: