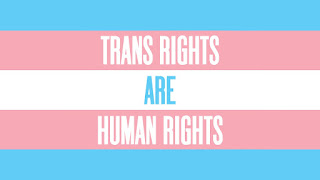 Two things I generally avoid: Getting into it with transphobes on social media, and using my personal story to prove anything. But for some reason, a comment I saw recently on a friend's social media account made me want to break both those rules. My friend had reposted this viral post about the science behind the complexities of gender, and someone commented:

Not sure why that, of all things, really got me going. But it did. So here's my reply:

Hi. You don't know me. My name is Tamar. As a rule, I don't usually answer comments coming from your perspective, because frankly, it's exhausting. But your specific comment resonated with me in a surprising way. So I figure, what the hell, rules are meant to be broken. I'll say my piece, for whatever it's worth to you or anyone else. So pop some popcorn, pour yourself a libation, put up your feet, here we go.
Twenty-four years ago, I became the mother of twins I presumed were boys, and 18 months later, a child I presumed was a girl. As a teenager, one of the twins came out as a transgender woman. Believe it or not, having been through this makes me understand the thinking behind your question better than you'd imagine. And in a weird way, it makes my better able to empathize with you.
The subtext of your question about birthing babies (everybody knows women have the babies!) is based on a logical fallacy, one that people use all the time: the appeal to self-evident truth. It seems to you crystal clear that certain things are true, in this case, that anatomy = gender. You know what you know. You have no patience for the sophistry of those who would argue otherwise, whom you presume to have ulterior motives.
It may surprise you to learn that I understand your thought process, though not your conclusions, in my very bones. My reasons may have been different than yours, but when my daughter came out, my brain screamed, loudly and insistently: I KNOW WHAT I KNOW. The truth is self-evident.
Like you, I was raised in a world that had so marginalized transgender people that I had never thought deeply about the whole matter. Unlike you, I suspect, I supported the right of trans people to live as the gender they know themselves to be, and I believed them when they proclaimed their true gender (or so I thought). But as it turned out, I held a whole lot of faulty assumptions about what transness was, and who was trans. I knew what I knew. Transness is obvious from childhood; trans kids are deeply depressed and often suicidal; trans girls have always been effeminate. None of this applied to my kid.
My brain was screaming at me because I had dedicated my life to being the best parent to my kids that I could possibly be, and the biggest part of that was to truly and deeply KNOW my kids. And here is this kid telling me she is a girl? How could I not have noticed that? I felt like a terrible failure, a bad parent who had missed something so incredibly important. I will not lie, it took me awhile to get over myself and really listen to her, and to others, and come to understand that our children are unique individuals with complex inner lives that we cannot fully know.
Beyond that, there was the terror. I wanted what every parent wants for their child: love, comfort, confidence, a chance to thrive. And SAFETY. I kept thinking, the world will be so cruel to her. Doesn't she know that? I know that! Everyone knows that! Can't she just...find some safe middle road?
Because I love my child (all my children) with all my heart, the most important thing to me was to treat her with kindness, support, and seriousness. We found all kinds of professional help for all of us, including support groups where we could discuss, really discuss, our innermost thoughts and fears. (Maybe there are some parents out there who adjust to a child's transition easily, but I have yet to meet them.)
The most important thing I've learned is that sometimes, we don't know what we don't know, which is very hard and scary to admit. Our culture, our language, and most importantly, our own feelings and experiences ingrain in us notions of gender that we take to be obviously true. But they are subjective. They are not universal.
So you do not know what you think you know. Your world view tells you that gender, sex, and anatomy are all neatly packaged in one certain way, and that anything else is, at best, a misguided untruth, and at worst, a perversion of nature. But your world view is narrow and false. Your world view is as flawed as those who believed that illness was caused by imbalanced humors or that whales are fish.
You probably think that, if transness were real, it wouldn't have just popped up out of nowhere all of a sudden. That, too, is false. Trans people have always been here, but they have coped with cultural taboos as best they could. And if you think widespread taboos are proof of some natural order, please keep in mind that widespread human beliefs perpetuate all manner of horrors. Slavery. Misogyny. Racism. War. The MCU.
I have lived through letting go of what I thought I knew -- including having to admit to myself that I didn't know my own kid as completely as I'd assumed. It's so, so hard. (But I have also discovered that the human being she is is the human being she always was, with the same loves, talents, sense of humor, intellect, etc, and she's more open than ever, which is wonderful.) I hope that you are a person capable of empathy and open to reason (including the reason on display in the original post), and that you can acknowledge that you might have much to learn.
Here endeth the lesson.

Posted by Tamar Wyschogrod at 11:55 AM No comments: