This poetry slam video has been making the Facebook rounds among my Jewish friends. In it, a young man named Ethan Metzger defends his Judaism against the charge that his faith is the result of brainwashing.

Before anything else, let me just say that I have nothing but respect for this young man. His idealism does him credit, as does his creativity. It takes guts to get up and speak about your core beliefs in front of strangers, and he is articulate in his defense of his moral vision.

But here’s the thing: The Judaism he defends is all about respect, tolerance, integrity, love, faith and character -- all elements of Judaism, but all low-hanging fruit. These are the humanistic ideals widely shared by people around the world, of many different faiths and of no faith at all. In fact, if you bleeped the references to Judaism and edited out the yarmulke from this video, the religion or moral system in question wouldn’t even be identifiable.

The Judaism of Ethan’s piece is the stripped-down, modernized version that has easy, universal appeal. It’s a version that focuses on values and general principles, not on laws, traditions, rituals and practices. It’s all about “ben adam l’chavero,” the aspects of Judaism that deal with human relationships to each other, not “ben adam la’makom,” the aspects that deal with the human relationship to god. The whole “do unto others as you would have others do unto you” thing is pretty copacetic all around, while the whole “I am the lord your god” thing -- and for that matter, a “jealous and vengeful god” -- is a much harder sell.

It would naturally offend any young person of faith to be accused of having been brainwashed. But would Ethan’s response be so effective if he brought other aspects of Judaism into it -- aspects that are more problematic and also more particularly Jewish (which is not to say that they are more essential to Judaism -- just that they are more identifiably Jewish)? I’m talking about beliefs like biblical creation, divine revelation at Sinai and the parting of the Red Sea; milk and meat must not be eaten together; Sabbath is a day of rest that precludes lighting a fire but does not preclude walking 20 miles; god demands animal sacrifice; menstruating women are impure and must be set apart for seven days; god requires fewer mitzvot of women because of their domestic obligations; god told his people to utterly destroy every man, woman and child of a particular nation; the Jews are god’s chosen people.

For that matter, does Ethan believe all these things himself -- and if not, why not?

It’s’ not my intention to argue the validity or invalidity of belief in these things, but to point out that they do not lend themselves to quick-and-easy, gut-level acceptance by a mass audience. I’m pointing out that Ethan’s defense of his Jewish education is facile. In a world where most people at least pay lip service to such values as kindness and integrity, Ethan’s audience is of course going to get a feel-good rush in response to his passionate defense of feel-good Judaism. But Judaism is much more than those things, or at least, that is what a traditional Jewish education teaches.

As Jews, we have to grapple with the whole picture, not just the easy parts. In a world where science contradicts Torah; where women are free to move well outside traditional boundaries; where assimilation is not just possible, but likely; where we are free to walk paths of our own choosing; where most Jews at least question, if not outright reject, some aspects of their tradition; the question of what we believe and why we believe it is much bigger and thornier than Ethan acknowledges in his piece.

Just because the person asking whether you’ve been brainwashed is a jerk and a bully doesn’t mean the question isn’t valid. But I feel pretty certain Ethan Metzger, along with many other good, smart Jewish kids like him, will continue to confront the difficult questions. As they get older and gain perspective, the answers may not seem so simple -- which is as it should be.

Posted by Tamar Wyschogrod at 11:09 AM No comments:

Carrie, mikvah and me

Not too many people, upon hearing of a Carrie remake hitting theaters, think immediately of mikvah. If that association is perfectly logical to you, then you’re probably a female Boomer of the Tribe (or Jew of my generation).

The original Carrie blew my 14-year-old mind when it came out in 1976. I didn’t fully understand why it disturbed me so greatly at the time, but in later years I came to realize that its premise -- that female puberty carried with it a toxic combination of shame and the potential for destructive supernatural power -- is an assault on any thoughtful teenage girl, let alone one who has just taken a class in taharat hamishpacha (literally, “family purity”; Jewish law governing ritual impurity associated with menstruation -- a required class at Ramaz, the Upper East Side Jewish day school I attended).

Carrie made explicit what our modern culture has buried deep beneath the surface: a primal terror of the once-mysterious female procreative capability, represented by that most metaphysical of symbols associating female sexuality with death: blood. Carrie played that for all it was worth; no one who saw that movie will ever forget the blood.

Lately, I’ve read a couple of things about how Jewish women are trying to bring the tradition of mikvah into the modern age, making it meaningful in a contemporary context. Mikvah is a ritual bath; under Jewish law, a woman is niddah, or ritually impure, as a result of menstruation and cannot be touched by a man until immersion in the mikvah purifies her. I know this because I took taharat hamishpacha. We even had a field trip to a mikvah, where we were told all about how, once married, a week after our periods end we’ll have to come to the mikvah, strip off everything (including jewelry -- they made a big point of that), and immerse ourselves completely before we can be touched by our husbands.

Even back then, when I was still pretty gung ho about Orthodox Judaism, I was horrified.

I have never gone to mikvah. 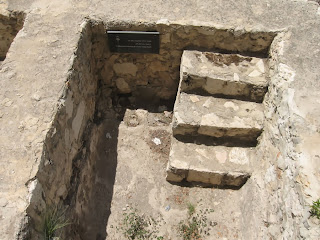 As far as I’m concerned, anyone who doubts that the laws of niddah and the tradition of the ritual purification of mikvah have their origin in the same blood-and-death superstition that drives cheesy horror films is deluding herself. And anyone who thinks that that association can be redeemed through reinterpretation -- that modern revisionism will wipe away the stain of the original intent -- is also deluding herself. No matter how badly you want to make the traditions of your religion dovetail with your modern sensibilities, some traditions cannot weather the elements that batter them, like science and egalitarianism; they are built on unsound foundations and will not stand. You should not resort to slapping a fresh coat of paint on old symbols and rituals that will always reveal their underlying form and function.

Why not? Because symbols and rituals influence the way we make sense of our world. That’s why they exist. They serve as constant reminders of the belief system that created them. They influence our thinking by permeating not just the culture around us, but the most personal spaces of our lives. If symbol and ritual were not so effective, they wouldn’t be ubiquitous in every culture that ever existed.

What harm can antiquated ideas about female fertility possibly do in our own age of information? Plenty. The sex-and-death association is all about casting female sexuality as a dangerous force; it’s a myth that supports a male-dominated power structure. Much ink has been spilled on why men seem so desperate to control female sexuality: the male need to control the blood line; the threat of female sexual autonomy; the association between female sexuality, hostile natural forces, and even the devil himself. The notion that women, in their pubescent stage, and more generally in their sexual, reproductive role, are unpredictable, aggressive, unreliable, flighty, destructive, mysterious, emotional, and dangerous permeates our culture. The logical extension, that women must be controlled, humored, infantilized, objectified, and fetishized, persists as well. The definition of femininity that to this day prevents women from taking their rightful place in public life; from acquiring true agency over themselves; from escaping the narrow confines of being defined by their sexuality; in many places, from their very liberty and human rights -- that definition of femininity is rooted in everything of which mikvah was created to remind us.

No doubt there are many who say that, whatever their origin, these ideas about femininity, pernicious as they are, now live on independent of any connection to ancient rituals and symbols. I would argue otherwise; I don’t think any girl, when first told that her period makes her impure and untouchable, fails to connect a whole lot of cultural dots, consciously or otherwise. But even if these ideas no longer root themselves in ancient symbols and rituals -- even if they have broken loose and become free-floating, received ideas that must be battled head-on -- why hold on to the rituals and symbols as if they mattered? Why be attached to the historical representation of ideas that have caused so much misery and oppression?

I really can’t see mikvah reinvention as a positive thing. Making a mikvah look like a high-end day spa strikes me a bit like putting Carrie in a prom dress; it’s just not that easy to hide the taint of Original Sin. Carrie’s vicious schoolmates hadn’t actually changed their spots by making her prom queen; they were incapable of seeing past the blood, and it was excruciatingly naive of Carrie not to recognize that. Similarly, mikvah will always be about blood. There is no magic wand-waving -- no amount of limestone tiling, fancy bath products and skylights -- that can erase that fundamental, historical truth. Nor should it. The danger of revisionism lies in whitewashing hard truths about the past.

Symbols and rituals matter. Among all the truths that get lost in our materialistic culture, that one is so lost, no one even thinks about it. But perhaps we should.

The biblical source of the laws of niddah:

NB: Yes, I know men go to mikvah, too. It has mostly to do with nocturnal emissions. Hey, nobody said sexually repressed societies only target women. Just mostly.