This is about birthright citizenship — how my family was nearly wiped out for the lack of it and was saved by a country that had it. But of course, this is really about Donald Trump and his threat to end birthright citizenship in the United States by executive order. Yes, I know, he can't really do that; it's an election-season stunt. But it's nevertheless important to understand what he is saying, why he is saying it, and to whom it's meant to appeal.

Trump and his followers would have you believe that this is a simple numbers game — that it's about the right of a sovereign nation to protect itself from an overwhelming number of immigrants becoming a burden on society. But what it's really about, now and historically, is not numbers of citizens, but kinds -- as in, keeping out the wrong kinds. If you doubt it, look at the 1898 Supreme Court decision in United States v. Wong Kim Ark, which established that the 14th amendment should be applied to all people born on American soil: “The Fourteenth Amendment, in clear words and in manifest intent, includes the children born, within the territory of the United States, of all other persons, of whatever race or color, domiciled within the United States.”

Justice Horace Gray recognized that the case before the court was aimed at making it possible to withhold American citizenship from non-white people by excluding them from the birthright defined by the 14th Amendment. In fact, the 14th Amendment was a Reconstruction measure guaranteeing citizenship rights in response to to questions about the status of former slaves following the Civil War. Whatever specious arguments are brought against birthright citizenship today, in reality, the attempt to end it is still about giving the state the ability to keep out certain kinds of people. In promising to end it, Trump is telling his followers that he will stop at nothing to keep America white and Christian. The moment we require American-born children of non-citizens to apply for citizenship rather than be automatically granted it, we open the door to denying them citizenship for reasons like “race or color.” Trump’s followers get that, loud and clear.

Which brings me to my own family history.

My father arrived in the United States on July 4, 1939, with his parents and brother, refugees from Nazi Germany. It was a miracle they made it — and the lack of birthright citizenship in Europe played a major role in their harrowing tale. You can hear my father tell the whole story in the video below, but here are the key elements as they pertain to the citizenship question.

In the 1930s, there were tens of thousands of Jews who were Polish citizens living in Germany. I don’t say Polish Jews, because many of them, like my father’s family, had never been to Poland, spoke no Polish, and had no affinity for that country. After all, they had fled what had been, until the Nazi era, the more virulent anti-Semitism of Poland for the greater tolerance of Germany.

But as Nazism took hold of Germany, Poland anticipated that all those Jews with Polish citizenship would come flooding back from Germany, and they weren’t too keen on the prospect. They announced that they would require any Polish citizen who had been out of the country for an extended period to obtain a special note from a Polish consulate before being admitted to Poland. But Jews couldn’t get that note. Essentially, Polish Jews in Germany were left stateless. Germany, meanwhile, was interested in ridding itself of as many Jews as possible. Deporting Polish Jews seemed like a good place to start. 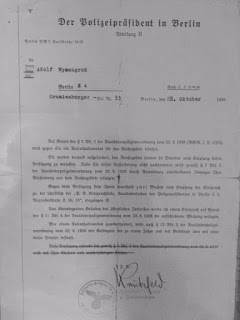 On October 28, 1938, the SS knocked on the door of my grandparents’ apartment in Berlin, handed my grandfather a deportation order (pictured here), took him away, and put him on a train bound for Poland, a country totally alien to him. The Germans had decided to deport all Polish Jewish men over a certain age, whether the Poles wanted them or not. My father was too young for the deportation. His brother, while old enough, got away with lying to the SS about his age, and was not taken. But my grandfather was given a few minute to pack some belongings, forcibly removed from his home, and deported within hours.

German persecution of the Jews always took place within the framework of its own laws. The Germans prided themselves upon being a nation of laws, as we do. But laws can be made to serve evil ends. The targeted, anti-Semitic deportation of Polish Jews was simply the selective enforcement of a sovereign nation’s right to expel non-citizens, most of whom were Poles simply because birthright citizenship did not exist.

Months earlier, my grandparents had begun a desperate attempt to obtain visas to the United States. Miraculously, they succeeded — but only after my grandfather’s deportation. My grandmother, father, and uncle were in Berlin. Four American visas were at the embassy in Berlin. But my grandfather was stuck in Poland. In order to receive his American visa, he had to appear personally at the embassy in Berlin. Had he not devised a risky scheme to re-enter Germany, rejoin his family, pick up the American visas, and hightail it out of there, it’s likely my grandmother would have elected to join my grandfather in Poland rather than emigrate to America without him. The whole family would probably have perished in the Holocaust. How they managed it is a long story (which my father tells in the video below, if you’re interested), but suffice to say, they did. That’s how it came to pass that my father had his first glimpse of the Statue of Liberty on the Fourth of July, 80 years ago.

By awarding citizenship based on blood line rather than place of birth, European nations in the 19th and early 20th centuries were preserving their ability to enforce a narrow, exclusive idea of nationality — of who belongs and who does not. It was the perfect tool for fascists. Trump’s backward nationalism is a throwback to that ideology, and it’s no wonder he landed on the issue of birthright citizenship as a means of telegraphing that. Make no mistake: Trump is signaling a promise to preserve white, Christian dominance of the United States. Given his fear-mongering and dog whistles about immigrants, non-Christians, and non-whites, who can doubt it? His rabid base know exactly what he’s getting at -- and they love it.