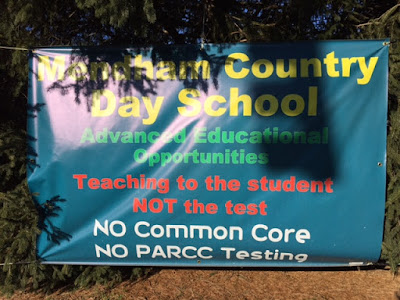 When I drove past this sign this morning, I had to stop and take the picture. It tells an entire tale about how education is creating new rifts in a society already characterized by vast inequality.

“Mendham Country Day School. Advanced Educational Opportunities. Teaching to the student NOT the test. NO Common Core. NO PARCC Testing.”

This private, $20,000-a-year K-6 school knows exactly how to grab the attention of affluent parents who are likely to send their kids there -- parents who either have direct experience with or have been hearing a lot about high-stakes standardized testing in public education. The four words, teaching to the test, speak volumes, and none of it good. They suggest that public school offers mechanistic pedagogy designed as a very limited tool to do one narrow task -- prepare children to pass a specific test  -- rather than the kind of teaching that inspires creativity and original thinking,  promotes intellectual curiosity, and develops the power to reason. Teaching to the test gets kids over an arbitrary hurdle placed in front of them in one given year. The implication is that this school will instead give kids the tools they need to be more broadly successful throughout their education and beyond.

“Nonsense,” say the data pushers. “That’s just paranoid. Common Core-aligned PARCC tests are just tools that help kids see how they’re doing and allow teachers and schools to be held responsible for their outcomes.” We’ve been hearing the rebuttals for years now: Affluent white parents are just afraid to discover their precious little dears aren’t as smart as they thought they were. They’ve been brainwashed by the teachers union. They’re afraid of change. They fail to see the big picture.

But if it’s so paranoid, why are the people behind these reforms, like New Jersey governor Chris Christie and state Board of Education president Mark Biedron, sending their kids to exactly this type of private school? They live in towns with some of the top public schools in the nation -- schools that don’t have to deal with the problems of poverty and lack of resources, but are subject to the same testing requirements as every other public school in the state. Instead, for their own kids, they choose private schools free of Common Core and standardized tests. Are these guys afraid their kids aren’t smart enough for Common Core and PARCC?

Of course not. Neither was I when I chose to remove my three children from the public school system. Sure, standardized testing soaked up a ridiculous amount of time that could have been spent on more important things, but I honestly didn’t believe those lost days would have a significant impact on my high-achieving kids over the long run. The real issue was what would happen on all the rest of the days. Even before the implementation of Common Core, I could see the harm that was being done by the high-stakes testing regime of No Child Left Behind, and later the Obama administration’s Race to the Top program, which bound the fates of schools and teachers to the test scores of their students.

High-stakes standardized testing strangles learning in a number of ways. It dictates what is taught in the classroom by creating an irresistible incentive to focus on test prep. It pushes out of the classroom any subject, activity, or strategy that doesn’t directly enhance test scores in the short term. It handcuffs teachers from developing curriculums and classroom strategies that play to their own strengths as teachers and meet the unique needs of specific classes and students. It promotes mediocrity by rewarding schools and teachers for getting as many kids as possible over the line of basic proficiency rather than for driving high achievers to new heights. It drives schools to divert resources away from extracurricular and enrichment programs that keep kids engaged with school but aren’t perceived to contribute to higher test scores.

As my children moved through elementary and middle public schools, the writing on the wall became ever clearer: High-stakes testing was the new normal. By the time my eldest were entering their last year of middle school 4 1/2 years ago, it was a crapshoot whether they’d make it through high school before the shit really hit the fan. We knew that Common Core-aligned tests would emphasize close readings of informational text, which would change the way high school English was taught. We saw our school district’s excellent instrumental music program beginning to shrink. It seemed likely that PARCC would soon be a graduation requirement. Teachers, already vilified by anti-union forces who begrudged them their pensions, were alarmed at the prospect of their jobs depending on highly unreliable test scores. How would this affect our kids? Without a crystal ball, we couldn’t be sure. But we knew two things for certain: Every kid gets only one shot at high school, and all this data-driven reform was bullshit. We enrolled our kids in private school. We were lucky we could, though not with the same ease as many other parents who send their kids to elite private schools. Most people are not fortunate enough to be able to take this route.

The Mendham Country Day School sign is a pretty strong indicator that we are not alone. Other parents who can afford to jump ship are moving their kids to private school in response to high-stakes testing. Those schools are understandably capitalizing on that trend in the way they market themselves. How long before the demographic shift becomes noticeable and suburban school districts begin to feel the pinch of wealth flight?

When “No Common Core, No PARCC Testing” is a major selling point to the well-off, even as the ruling class pushes Common Core and PARCC for everyone else’s kids, there’s something very wrong. “Teaching to the student not the test” is not just a sign of the times. It’s a sign of trouble.

Posted by Tamar Wyschogrod at 3:13 PM No comments:

Downton Abbey drowns in fantasy-based nostalgia for an aristocracy doomed by historical circumstance, threatened by unions and socialists out to destroy civilization, and ultimately rescued by free-market capitalism. Unlike Upstairs Downstairs, which he shamelessly ripped off and turned on its head, Julian Fellowes has no real sympathy for the lower classes, who walk a razor-thin line between menial employment and starvation; he treats their revolutionary chatter as adolescent ranting, because obviously what everyone really wants is to win the lottery like Tom Branson and get a free ticket to the good life. Fellowes is far more sympathetic to the “hardships” of the aristocrats and the threats to their social status and vast estates; all they need to do is chill on the snobbery and they'll be good peeps. Because while the servants are childishly ranting about Marx, their betters are embracing Jews and Irish revolutionaries. Because, yeah, I bet THAT happened a lot among the aristocracy between the wars.

Downton invites wonder at the splendors of the upper class's vanished lifestyle -- maybe even raises questions about its sustainability -- but stops well short of indignation at the injustice of a system that supports such artful gluttony.  One wonders if Fellowes even sees the irony in Robert Crawley puking blood all over the lavish table and evening wear, which the servants will have to somehow render spotless by morning.

And speaking of irony, here's an interesting parallel to chew on: 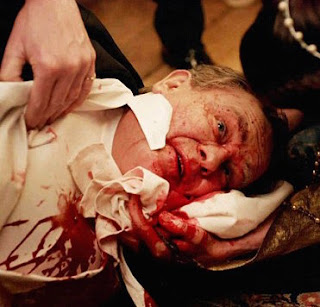 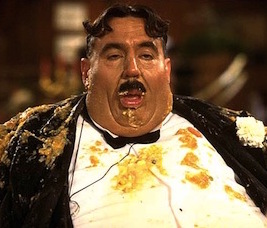 Posted by Tamar Wyschogrod at 1:36 PM No comments:

Patriarchy and the dinosaurs

My interest in Miss Fisher’s Murder Mysteries (which I adore) and Downton Abbey (which I haven’t adored since season 1 but kept watching anyway) has led me to read up a bit about the change in women’s status in the 1920s. One refrain is repeated over and over: World War I created a sea change in the status of women, the ripples of which affected everything from politics to industry to fashion, with one of the most important results being the right to vote.

But it wasn’t until the other day, when my husband was telling me about a Nova he watched about secret tunnel warfare in WWI, which mentioned some shocking casualty statistics, that the whole thing really came together in my mind. I started looking up the numbers. I always knew that WWI was insanely bloody, but – holy shit. Between both sides, more than 65 million men were mobilized; of them, 8.5 million were killed, more than 21 million were wounded, 7.75 million were taken prisoner or went missing, for a total of about 37.5 million casualties, or 57.5% of the total force. It’s safe to assume that these casualties were almost entirely male.

And then, for good measure, 30 years later WE DID IT AGAIN. In World War II, there were 25 million or so military deaths, 70 to 85 million deaths total. Estimates vary a lot, and I won’t bother trying to look up numbers of wounded or any demographic breakdowns – obviously, a significant proportion of those deaths were women and non-Westerners – but the point is, between the two world wars, the male population of the Western world was decimated.

In other words, in order for the status of Western women to improve, it took a cataclysm that killed or maimed an incredible percentage of men – in some cases, like Germany, half or more. In a sense, WWI and WWII are like the meteor that wiped out the dinosaurs: an event so deadly that a new ecological niche opened up, allowing other species to rise up and fill it. (It’s not a coincidence that in Switzerland, which remained neutral through both world wars, women didn’t get the vote until 1971! Did you know that?)

All of this makes me ask two questions. First, why is it that the status of women in the world defaults to “super sucky” unless we start wiping out men? And second, can human beings bring about a more just world without all the killing? Please?