Last Christmas with my dad

As I write this, I am sitting in my niece’s old bedroom in my brother’s house, my temporary home for the week. I am Dad-sitting. Dad, who is now 86, has lived with my brother for the past six months, ever since his dementia progressed to the point where he could no longer live on his own. I can only imagine how hard this has been on my brother and his wife. They are away on a much-needed vacation, and I am staying with Dad to keep an eye on things and to fill in where there are gaps in the home health aide schedule.

It’s so difficult, seeing Dad like this. It’s gotten to the point where he either sleeps most of his day away, or he is visibly agitated about some imagined appointment he must keep, or he prattles on nonsensically, using words and phrases reminiscent of his old self – “…it is a well known phenomenon…,” “…in Europe before the war…,” “…I have had no communication…” – but trailing off into meaningless non-sequiturs. Simple activities like walking to the bathroom, getting dressed, and eating meals present great challenges, not because he is physically unable to do them, but because he becomes confused and lost mid-act, and no amount of explanation seems to help.

My father. He and I have had our differences over the years, and as I grew older I learned to see his flaws, but that never changed the fact that he was the quintessential father: steady, reliable, hard-working, strong, devout. Both my parents were brilliant, but Dad was the one who took care of things, who managed all the practical details while making his expectations crystal clear: Get an education, live a life of the mind, be a good Jew. I was never sure I’d measured up to any of these; I know he was disappointed with my choices on the latter, though eventually his affection for me, and even more for my children, impelled him to treat us with unfailing kindness.

The man with whom I’ve spent the past week has shown flashes of his old self, but my father is being steadily erased by the chaotic malfunctioning of his broken brain. Dad is here and not here simultaneously. He is less here all the time.

Christmas day, yesterday, was especially challenging. For one thing, I was on my own with no aide during the day. And for another, he chose this day – or to be more precise, evening, as that seems to be when he is most wakeful – to become really agitated about a delusion that recurs from time to time: that someone from the IRS is coming to conduct some unnamed, urgent, unpleasant business. He repeatedly checked the front door to see if someone was coming [an alarming habit, as he has more than once wandered outside], and he paced fretfully in anticipation of the dreaded visit [also an alarming habit, as he is unsteady on his feet and was injured in a fall just this Thanksgiving].

Finally, he tired himself out and lay down for a nap. This was my opportunity to do the one thing I’d been looking forward to all day: watch the Doctor Who Christmas special, “Last Christmas.”

I love Doctor Who. I wasn’t a fan as a kid – it was always Star Trek for me – but ever since the 2005 relaunch, I’ve fallen in love with the British madman in a box, all the more so since Steven Moffat took over as show runner in 2010. His intricate stories and nuanced characters, wrapped in the fluffy fantasy of family-friendly sci fi, are my idea of perfect escapism – pop-culture myth-making at its best.

So with Dad safely tucked into bed, for the time being at least, I settled down to watch. I may not celebrate Christmas, but I felt like I could use a good dose of the kind of adventurous, wistful nostalgia Doctor Who could be relied upon to dish up at this time of year. Christmas specials are designed as treats for the kids, so you know that, after all the terror and dashing about, there will be a happy ending. I needed a happy ending.

And of course, I got one. But here’s what I didn’t expect: Along the way, I got a very adult-strength shot of reality -- very immediate, and not a little painful.

At one point, Clara, the Doctor’s companion, trapped in a dream state, finds herself at home on Christmas day with the love of her life, Danny – who died in last season’s finale. The dream is a kind of trap that keeps her helpless while an alien feasts on her brain. The Doctor finds a way to enter her dream and urges her to reject it,  wake up, return to reality, and save herself. The Danny of her dream, so real to her – and after all, don’t we tell ourselves that our memories keep our loved ones alive? -- urges her to miss him for only five minutes a day and then get on with her life, because he is dead.

“Do you know why people get together at Christmas?” he asks her. “Because every time they do, it might be the last time. Every Christmas is last Christmas.”

A lump swelled in my throat. Surely, this is my last Christmas with my father. It makes no difference that Christmas is just a date on the calendar for us. Whatever the coming year holds, I don’t think there will be even a glimmer of my dad left by next December 25.

Is there anyone my age who heard that line and didn’t react the same way? Anyone of any age who has felt the sting of loss, or who knows he or she soon will, who didn’t shed a tear? We mark the turnings of the seasons, the year’s end, the milestones, with gatherings of friends and family because, for each of us, there will be a last one. It’s not a truth we generally speak aloud, but we all know it.

“Last Christmas” is about the nightmare of dreams within dreams within dreams; about not knowing the dream from the reality. In the end, the characters are returned to their own realities – awakened -- by Santa Claus and a Time Lord, as absurd and unlikely a pair as any you could dream up. But of course, it doesn’t end there. There is one last awakening. I turn off the TV; Santa and the Time Lord disappear, and I am back in my niece’s old room in my brother’s house, with a father who is with me for one last Christmas.

It’s a funny thing about Doctor Who lately: It’s a family show that often seems to be speaking more to the adults in the room. But I guess that’s what happens when an old, old show about an old, old time traveler is taken over by a middle-aged fan. Steven Moffat grew up with Doctor Who; now Doctor Who is growing up with Steven Moffat. 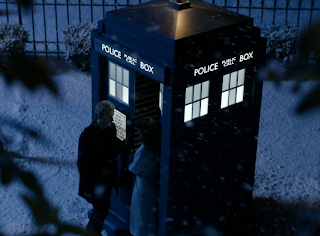 Posted by Tamar Wyschogrod at 3:10 PM No comments:

Email ThisBlogThis!Share to TwitterShare to FacebookShare to Pinterest
Labels: Doctor Who, Michael Wyschogrod

Five things Americans are less pissed off about than Sony

So Sony pulled The Interview. Americans are pissed off about being deprived of their god-given right to watch a [probably bad, but I’ll never know] comedy that was intended to outrage the very people it outraged. It’s at least worth considering the possibility that canceling an event in reaction to threats of violence isn’t totally nuts. But let’s stop for a minute and think about what Americans aren’t much pissed off about:


Posted by Tamar Wyschogrod at 9:43 AM No comments:

At American universities, "privilege" is a Greek word

UPDATE: So Rolling Stone is backing off the story:


In the face of new information, there now appear to be discrepancies in Jackie's account, and we have come to the conclusion that our trust in her was misplaced. We were trying to be sensitive to the unfair shame and humiliation many women feel after a sexual assault and now regret the decision to not contact the alleged assaulters to get their account. We are taking this seriously and apologize to anyone who was affected by the story.

Really, Rolling Stone? Do you have no journalistic standards at all? You didn't think about the fact that this story would be a massive bombshell? That it would be taken as the poster child for a larger problem, and that by not getting it right, you'd be handing ammunition to those who deny the larger problem? That by having to now say you're not sure of the truth, you are putting the victim, if she is a victim, through a new hell? Or conversely, that you damaged reputations in irreparable ways, if in fact the accused were innocent or perhaps never existed?

One thing is certain: By shilly-shallying, you've set the fight against rape culture on campus back years. Screw you.

So the president of the University of Virginia, Teresa Sullivan, made a speech in response to the Rolling Stone rape story.

Is UVA closing the frats?

How do you spell “privilege”? I’m pretty sure you spell it in GREEK.

When do the universities stop putting their institutional interest in pandering to rich frat alumni over the safety of their students?

When does the idea finally sink in that fraternities don’t just have a rape problem, they are built on a foundation of rape culture?

When do they take note of the fact that the kind of thing that came out in the Rolling Stone story has been going on in frats all over the country for DECADES, regardless of efforts to reform the system?

How many more chances do fraternities get?

When is enough enough?


Posted by Tamar Wyschogrod at 9:22 AM No comments: