Embarrassment is sort of embarrassing, when you think about it

Embarrassment is a really weird emotion. It’s related to shame, but it’s not exactly the same. Shame is an emotion you can feel about something even if no one else knows about it. It’s connected to your internal sense of right and wrong. Which isn’t to say that shame can’t be influenced by outside factors like cultural norms, religion, the disapproval of others, etc. But whether originating from without or within, shame is about how you feel about what you did.

Embarrassment, on the other hand, is entirely about how you feel about what other people saw you do. And it’s not even entirely about right and wrong. Sure, you can be embarrassed about getting caught doing something shameful. But you can also be embarrassed about being seen doing something that is totally an accident and not your fault, like tripping on the sidewalk or a bird pooping on your head. Those are misfortunes. We worry people will judge us to be clumsy, or our condition will revolt them. We’re not even sure why we feel so bad. We just do. And the feeling can be really intense, even about something relatively trivial -- as strong or even stronger than the shame we feel about having intentionally harmed someone or failed in a responsibility. Most of us probably still cringe at the memory of some embarrassing moment that happened when we were children, despite our adult knowledge that it was no big deal and is in fact a common occurrence in children (like, say, peeing the bed or forgetting a line in the school play).

The downside of being social creatures, I guess. Humans are weird.
Posted by Tamar Wyschogrod at 12:33 PM 1 comment:

It's art, it's history, it's art history 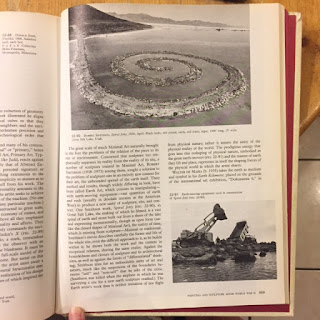 This article about a pilgrimage to Spiral Jetty made me pull out my college art history textbook: Gardner's Art Through the Ages, 7th edition. Back then, Gardner was divided into five parts that reflected the West's idea of history: the Ancient World; the Middle Ages; the Non-European world; the Renaissance and the Baroque and Rococo; and the Modern World. When it was my textbook, Spiral Jetty was just about a decade old. I remember staring at the black-and-white photo; the book is filled with such photos, which paradoxically utterly fail to capture the art they represent. Also paradoxically, the inadequacy of that photo made it one of my favorites. It appears on page 869 out of 889 total (excluding glossary and index). The chapter is called simply, "Painting and Sculpture After World War II."

From the epilogue: "The transformation of the world by science and technology is the signal fact that separates the modern epoch from all of the past....The iconic, mythic, and social function of representation has been monopolized by mechanical media -- photography, motion pictures, television. By these means images have been produced and reproduced in countless millions. The art object itself, through sophisticated means of reproduction, loses its uniqueness and it's 'space,' like the original sound of an orchestral performance reproduced in high-fidelity recording....Meanwhile, the Tradition has been dismantled."

How many more pages are there in Gardner today? The Internet tells me there are now multiple editions; one is called A Global History and another The Western Perspective.

Posted by Tamar Wyschogrod at 5:44 PM No comments: