Let me try to explain the special horror I, along with many American Jews, felt when the U.S. enacted an immigration ban targeted at a religious group on Holocaust Memorial Day of all days.

My grandfather was born in Vienna to parents of Polish citizenship. Under the laws of the day, that made him a Polish citizen, too. His family emigrated to Budapest, where he grew up. After marrying and having his first child, he moved his young family to Berlin, where my father was born. My grandfather had never lived in Poland and spoke no Polish. But on Oct. 28, 1938, the Berlin police came knocking at the door and handed him this document. 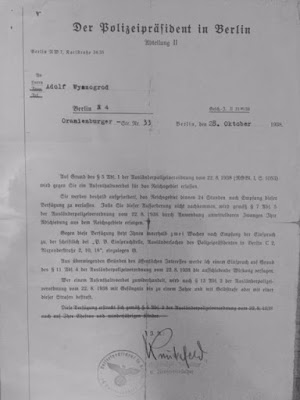 It's a deportation order. The Nazis were sending all male Polish Jews over the age of 16 "back" to Poland. They gave him ten minutes to pack a bag. He was taken from his family to a detention center, and from there to the train station, where they loaded him, along with hundreds of others, onto the next train to Poland. My father was 10 years old at the time -- old enough to remember how, after they took my grandfather away, my grandmother sent my father running to synagogue to warn his brother, who was 16 and also a Polish citizen, not to come home. To his horror, he couldn't get to the synagogue because it was already surrounded by police; as it turned out, my uncle had successfully lied about his age and had not been taken.

As fate would have it, this took place just as the family was anticipating its salvation. A relative who had emigrated to the U.S. a decade earlier had miraculously managed to enlist the assistance of Sen. Walter George of Georgia (ironically, a notorious segregationist) in obtaining visas for them, which were to be delivered to the U.S. embassy in Berlin. The story of how my grandfather managed to re-enter Germany, rejoin the family, and flee to the U.S. just a couple of months before Germany invaded Poland is amazing. You can hear my father tell it in the video below. (The video was made after my father's faculties were already starting to decline, but we managed to get the whole story more or less intact, if you have the patience to stick with it. It's rather long.)

But for my grandfather's sisters, who also lived in Berlin, there were no visas, and they did not survive.