Would you believe me? 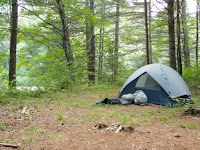 This is about what we remember and what we don’t; what we say and what we don't; whom we believe and whom we don’t. It’s about something that happened to me. It is 100% true, but I could not prove it if my life depended on it. It’s also about Christine Blasey Ford, Brett Kavanaugh, Donald Trump, and Me Too.

Forty years ago, the summer I was 16, I took a trip from New York to California with my older brother, traveling partway by car with friends and the rest of the way by bus, mostly putting up in cheap motels and campsites along the way. That’s how we came to stay one night at a campground in Monterey, California. I couldn’t tell you the date, or the name of the campground, or its exact location. It was, after all, 40 years ago.

We struck up a conversation with the guy at the neighboring campsite, who was alone. I don’t remember his name. We agreed to pool our food and have dinner together. At the time, it seemed like one of those nice things that happen when camping — helping each other out, being neighborly, sharing. My brother and I contributed Hebrew National hot dogs. I don’t remember what he contributed. We ate together by the fire in our campsite, chatting. When we were done, my brother volunteered to go wash the dishes at the outdoor faucet by the bathrooms.

As soon as he was gone, the demeanor of our new “friend” changed completely. I don’t remember what he said, or if he said anything. I just remember that he shoved me across the picnic table, pinned my arms above my head, and smashed his mouth against mine. I remember the feeling of the hard wooden table under my back. I remember our teeth clicking together. I remember being scared. Kicking and squirming, I managed to get out from under him and flee. I ran to the bathrooms and found my brother. I told him what had happened.

I don’t remember my brother’s exact words, but I know he was angry and wanted to confront the man. I told him not to. I didn’t want to make a scene. I told him to just stick with me and not leave me alone. We returned to our campsite. The guy was nowhere to be seen. Presumably, he had retreated to his tent. We got into ours and went to sleep. The next morning, when we got up, he and his tent were gone. There was no sign he’d ever been there. We ate breakfast, broke camp, and continued on our way.

It never occurred to me to report the incident to the authorities. I wouldn't have wanted to disrupt our trip, let alone my life, but I probably didn't even consider that. I simply didn’t think one reported such an event — a near miss. I didn’t think a crime had been committed. It would have been like calling the cops to say that a car whose license number you didn’t get had almost hit you on the highway, but you’d swerved and avoided the collision. It would have been reporting a non-event.

I never mentioned the incident to my brother again. It would have just made him uncomfortable, and anyway, what would have been the point? Nothing had happened.

Except something had. It didn’t damage me in a profound way. I didn’t become phobic, suffer PTSD, or develop an anxiety disorder. But I became much more cautious about being alone with strange men in isolated places. Like all New York girls, I had been raised with the usual warnings: Don’t walk alone at night; don’t get off the subway at the wrong stop; carry your keys sticking through your fingers; don’t walk too close to the buildings where someone can pull you into an alley or doorway; don’t hitchhike; don’t make eye contact; don’t wear revealing clothes; don’t go into bars alone; don’t go to the wrong neighborhood; always carry cab fare; boys only want one thing. So even though I was the sort of person who liked adventure and risk-taking, I took this experience as a check on my reckless nature -- a lesson in sensible precautions. I followed all of the self-defense advice. I cultivated a tough “Do not fuck with me” face, which I wore around the city, especially in the subway. I showed no fear, believing that to show fear was to make oneself vulnerable.

As time went on, I frequently thought about what might have happened if I hadn't gotten away, about what I had narrowly escaped, my understanding of the event increasing as I learned more about the world. Still, I didn’t tell anyone about it. It made me uncomfortable to think about. I probably mentioned it to no one for at least 20 years; the only person I recall specifically telling, even then, was my husband. But it was only recently that I came to think of it explicitly as what it was: an escape from an attempted rape.

When I began writing this, I messaged my brother, asking, “The summer we traveled cross-country, we spent a night at a campground in Monterey. Do you remember anything about that?” His reply: “I certainly remember Monterey but I don’t remember a campground.” And why should he? I’m sure that, at the time, he would have seen the incident much as I did: a close call, a non-event. Since it didn’t happen to him personally, with the accompanying fear and adrenaline, it didn’t impress itself on his memory. And I never mentioned it again. So today, he doesn’t remember it. To him, it never happened. I understand that. I can only imagine how many incidents people have told me about that were significant to them, but that I’ve forgotten completely.

And if I DID know who that guy was, and if that guy were nominated to the Supreme Court, or ran for president? I’d do whatever I could to make sure people knew what he did that night in 1978.

Would you believe me?

Posted by Tamar Wyschogrod at 12:42 PM No comments: