MAGA hat kid vs chanting Native American. I weigh in. 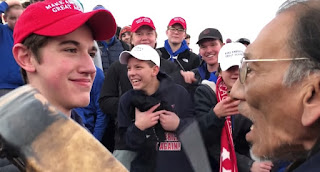 Do I know with certainty why MAGA-hat kid smirked creepily at chanting Native American man? No, I do not. Neither do those who insist that an innocent kid was victimized by social media gone mad and liberal media turned hateful toward white boys. The kid’s motive is known only to him. It is not a fact that can ever be established.

Here’s what I do know:

1. Donald Trump panders to racists. Not only don’t people who wear MAGA hats mind —  that’s why they wear MAGA hats. They’re the ones to whom he’s pandering. A MAGA hat is a public proclamation of allegiance to a fascist-leaning president who routinely uses “Pocahantas” as an insult and treats Wounded Knee as a joke. To an authoritarian buffoon who whips up fear and support in his base by characterizing Mexicans as violent rapists and urban (read black) America as a pit of crime and depredation. To a corrupt autocrat who rode to power courting white supremacists and who put Breitbart and the alt-right in the White House. To a president who praises foreign dictators and disdains democratic allies. A MAGA hat is a statement, just like a KKK hood is a statement. It speaks volumes. When you are wearing it, you are by definition non-neutral. You are saying something. This is a fact.

2. It’s beyond obnoxious for a Catholic school to send a bunch of teenage boys to protest abortion. If they tell a 14-year-old boy that he is qualified to dictate family-planning morality to adult women, it’s not unreasonable to infer he’s been raised with a sense of privilege that would make him act like an entitled brat when confronted by soapbox extremists and Native American activists. This is inference supported by reason, but not hard fact.

3. A bunch of sheltered Kentucky boys from an overwhelmingly white, largely Republican town came to the Big City. They encountered some batshit-crazy soapbox preachers. In New York, we’d have called that Tuesday. Or possibly Wednesday. Or Any Day. In fact, Black Hebrew Israelites were a Times Square staple for ages. We Coastal Elites know fringe nut jobs when we see them. But of course, if you’ve led a sheltered life in a mostly white, Republican Kentucky town, and been weaned on Fox News, you’d probably think this miserable little group of black men represented an entire race bent on destroying you and your whole way of life. Instead of ignoring them (if you haven’t been moved away from them by responsible adults, as should have happened), you’d engage them, and in your adolescent wisdom, you’d think school spirit cheers were a clever, passive-aggressive way to express yourselves while your MAGA hats do the real talking. Fact-based inference again. 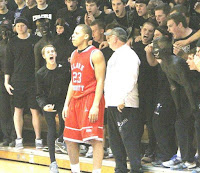 4. Since the D.C. event went viral, other information has emerged about Covington Catholic that reflects a school culture that conforms to what one might expect of an elite Catholic boys’ prep school: sports-obsessed, aggressive bro culture. Whatever you think of this video of a basketball game or this photo (Is that kid in blackface? Are they verbally harassing a black player? Or is it just some school tradition of body paint combined with the usual displays of aggression boys are taught to make at sporting events?), it sure puts into perspective what this school considers to be “school spirit.” Fact, some inference.

5. The first time I ever saw someone whom I could readily identify as Native American was in a Wyoming diner in the mid-1970s. A Native American woman ate while her two young children played on the floor under the table, bothering no one. A white waitress approached the woman and yelled at her to “keep her brats quiet or get the hell out.” It was one of the most blatantly racist moments I’ve ever witnessed. It created a prejudice in me. Ever since, I have been disposed to take the word of a Native American over that of a white person in interpreting the racial subtext of an encounter. Of course, in any given encounter, the Native American could be wrong and the white person could be right. A prejudice is not rational. Personal bias. But...