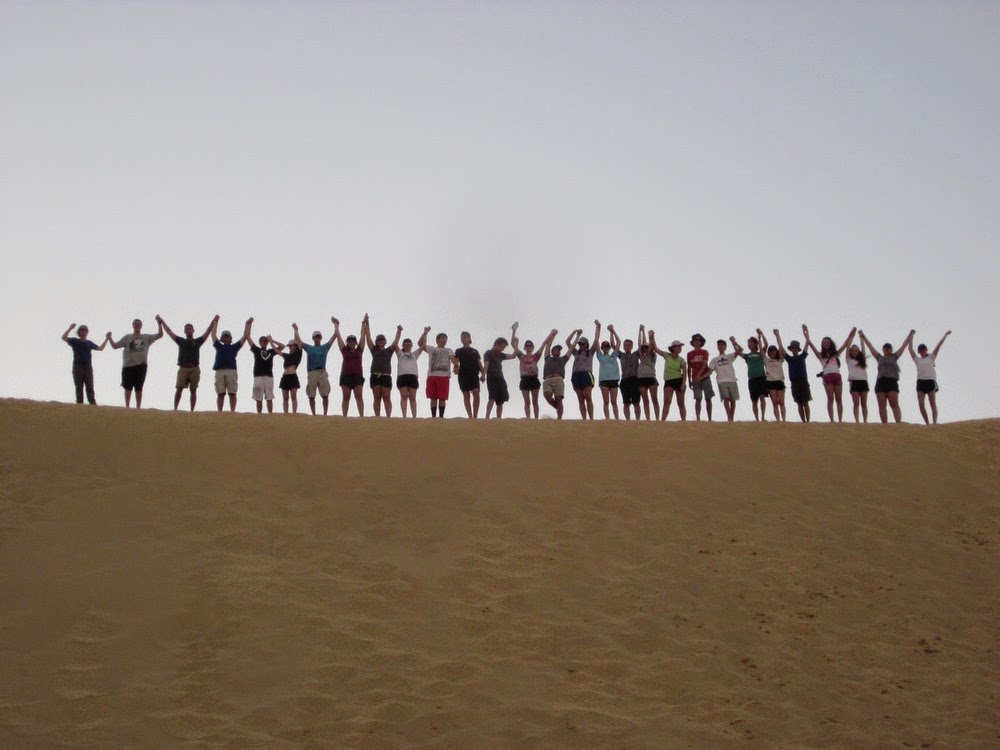 I am one of those parents they’ve been talking about on the news who has a teenager on a trip in Israel as the Gaza violence drags on and on. Well, that’s life. We often get what we didn’t ask for, and we get handed difficult decisions we’d rather not make.

So here are five reasons a Ramaz-graduate-turned-lefty-Reform Jewish mother from New Jersey kept her kid in Israel when the rockets started falling. (Spoiler alert: It’s complicated.)

1. I didn’t drink the blue Kool Aid. I know that Israel isn’t some goldene medina where Jews till the land all day and dance the hora all night, or whatever the 21st century equivalent of that myth might be (program smartphone apps all day and go clubbing in Tel Aviv all night?). The blue Kool Aid of good old-fashioned Zionist propaganda makes Israel seem too easy. But I don’t  believe that everything will be easy because some divine destiny gives us ultimate right to the land, or because the Jews are the good guys and the Arabs are the bad guys, or because the IDF is a cross between the Avengers and the Transformers. I know that if I want my kid to learn about Israel, understand Israel, even love Israel, he had better be prepared to deal with one big goddamn unholy mess. There will be no easy answers, no idyllic safe haven. I sent my kid to a place perched on a razor’s edge among hostile neighbors, angry refugees, arrogant theocrats, intransigent ideologues, hopeless bigots, and deluded religious extremists. But it’s also a diamond in the rough, a place that makes one giddy with the heady mixture of history, art, culture, natural beauty, spirituality, and more Jews than he’s ever imagined existed. And that matters.

2. I didn’t drink the red Kool Aid, either. I  want my kid to know that Israel isn’t South Africa, some artifact of Eurocentric colonialism created by people whose main goal was to build empire and wealth. It wasn’t established by racists who saw the locals as animals whose existence could be ignored, or better yet, exploited for profit. Those who’ve drunk the red Kool Aid are quick to dismiss the whole project of Israel as a banal evil. But I want my kid to know that the modern state of Israel exists because the bloody, broken survivors of Europe’s greatest man-made catastrophe limped across the world to a place that called to them and spoke to their hearts; they were drawn to a hope they desperately wanted to believe in. Then they opened the door wide for their extended family the world over, and they simply counted on the idea that somehow it would all work out in the end, despite the inevitable displacement of people who were there first, because how could the world shit on the Jews any more than Hitler already had? So was the whole thing a winning proposition? Well, no, but it was what it was. History happens. I hope my kid comes to believe that the Jews who flocked to Israel had much more compelling, humane reasons than the Boers or the Puritans. I want my kid to understand that the fruit of that desperate 20th-century Jewish migration is bittersweet, not evil or murderous. And I hope he does not shy away from confronting the bitter irony in starting a trip in the vanished Jewish centers and preserved death camps of Eastern Europe, and finishing it in a war-torn land created as a Jewish refuge from unspeakable violence.

3. Like so many other experiences we give our kids, travel requires us to find the courage to accept some risk so that they can grow. Hell, everything in life requires us to accept some risk so that our kids can grow. If I wanted my kid to learn about the Middle East from a completely safe vantage point, I would have taken him to the library instead of the airport. When I was young, my parents took me to Warsaw, Krakow, Auschwitz, Budapest, Berlin, then Israel – and this was in the 1970s, when few Westerners dared set foot behind the Iron Curtain. I learned then that travel, when it is not easy, opens the eyes and the mind.

4. With that said, it’s all about risk assessment. Look, I have ideals, sure, but I’m not looking to sacrifice my kid’s life just to make a point. But I can read a map and a newspaper. Much of Israel is out of range of Gaza rockets. The nice folks at NFTY aren’t looking to create martyrs, and they’re going to do their damnedest to keep the kids in their care far from where the rockets fall. There was a point in this conflict when I was worried about a northern front, but that didn’t materialize. I have no doubt if it had, NFTY would have pulled the plug.

5. I look forward to the day when my kid comes home with stories, ideas and opinions about Israel that were formed by reality, not by the dumbed down utopian version on display in American Hebrew schools and Yeshivas, or by the shrill anti-Semitism that seems to be proliferating everywhere else. Yes, I know that a NFTY trip has a pro-Israel agenda. And contrary to what my more right-wing Orthodox friends might think, I don't actually mind, within limits. I have a pro-Israel agenda, too -- just not one that relies on myth, propaganda, or wishful thinking. More importantly, my kid has a good yiddishe kopf. He thinks for himself. I had hoped that the progressive penchant of liberal Reform Judaism would bring some balance to a NFTY trip; I have no doubt that the bloody conflict in Gaza forced difficult issues to the fore. How could I bring my kid home because the difficult, nuanced, complex reality I’m always going on about was getting a little too difficult and real?

As I write this, I’ve just learned that flights from Israel have been suspended and NFTY is working on alternatives. I don’t know when my kid will get home. The saga continues, and my nerves fray more with each passing day…

The good news is that, after some back and forth (flight cancelled, new flight arranged, original flight uncancelled), it looks like my kid is coming home on schedule.

The other news is that, during the 24 hours during which it looked like the group would be spending a few extra days in Israel, a program was put together for them that included an opportunity to discuss the current situation in Gaza with someone described in the email from NFTY as "an expert on the Middle East conflict." I was really happy to see that. I thought it was a brilliant use of the time, and a great opportunity for the kids. Until I looked up the "expert," Neil Lazarus. It turns out that what he's an expert at is hasbara, i.e. pro-Israel PR, i.e. propaganda. In other words, he serves blue Kool Aid. I was really disappointed in NFTY, though by now, I really shouldn't be surprised. See for yourself.


SATURDAY UPDATE: Just spoke at length with my kid on his last day in Israel (probably). As I expected, he said the Gaza conflict pretty much undermined NFTY's blue Kool Aid agenda, and there's been a lot of discussion of the situation among the kids and counselors. In particular, he said, they've had the opportunity to hear a wide range of opinions, left, right, and center, from the Israeli teens who joined the group for part of the trip. And, like much of Israel, events in Gaza have not affected his day-to-day experience very much. In fact, he's had a blast. I'm sure he realizes how much more fortunate he is than those who don't have an Iron Dome, or who fill the boots on the ground. Maybe someday, when the jet lag is gone, he'll write his own update, which I'll post here.
Posted by Tamar Wyschogrod at 10:01 PM 2 comments: