Politically correct: conforming to a belief that language and practices which could offend political sensibilities (as in matters of sex or race) should be eliminated.
-- Merriam Webster


I’m sick to death of the now decades-old charge that political correctness is ruining everyone’s fun. Can’t say this, can’t joke about that, woe is me.

SHUT THE FUCK UP, WORLD OF WHITE MALE PRIVILEGE.

Without the courageous, unrelenting tenacity of civil rights advocates, feminists, gay rights advocates, etc., insisting that it’s not okay to use certain terms, make certain jokes, or turn a blind eye to certain behaviors, nothing would ever change. And you know why nothing would ever change? Because Big Evil worms its way into the very fabric of our society, our most established institutions, the agencies that are supposed to serve our citizenry and protect our vulnerable - right in the heart of the supposedly civilized Western world.

We learned a lot about societally sanctioned racism in the 60s and 70s. Now we’re finding out about another Big Evil - sexual misconduct, up to and including extreme sexual brutality against children.

The Catholic Church.
Penn State.
The BBC.
The NYPD.
The Boy Scouts.
The US military.
The IMF.
Horace Mann.
The Secret Service.

We would not have learned about any of this had it not been for activists who insist on drawing a clear line in the sand that must never be crossed. You don’t uncover the complicity in heinous crimes of institutions like these by being wishy-washy. Political correctness refocuses people’s attention to notice what they had previously overlooked; to acknowledge the existence of what they had previously refused to acknowledge; and to stop implicitly condoning that which is indefensible.

Let’s be real clear here. Political correctness does not include banning Huckleberry Finn because it contains the word nigger. Or suspending a kid from school for hugging. Saying that those things prove political correctness is bad is akin to saying that Sarah Palin proves democracy is bad. Do not let stupidity ruin everything for the rest of us.

And another point: Political correctness doesn’t mean you can’t ever joke about certain topics. It means you can’t joke about those topics in certain ways. And if you think that’s too nebulous a standard - tough. When in doubt, shut up. (Daniel Tosh, I’m looking at you.)

Given the horrible stuff that’s come to light lately, I hope people will begin to recognize that what has come to be derided as political correctness has made these revelations possible. And those revelations, in turn, make real change possible.

And Daniel Tosh can kiss my politically correct ass.

Posted by Tamar Wyschogrod at 9:12 AM No comments:

A binder meme ate my brain

I admit it. The whole "binders full of women" thing captures my imagination. Also gives me a chance to show off my awesome Photobucket skills. So I made these: 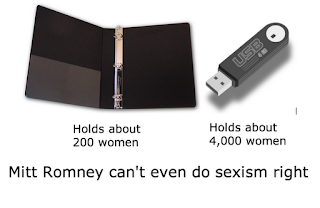 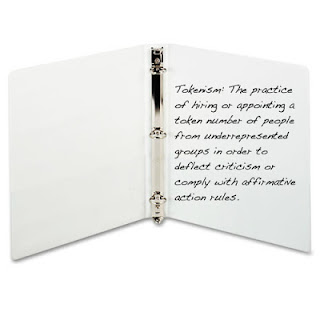 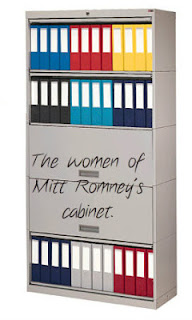 If you are living in a cave and haven't visited the home world of this meme yet, click here.

And then, of course, there's this on Amazon.

Posted by Tamar Wyschogrod at 11:40 AM No comments:

On language, education and BS


When I got my first job working for a big corporation in the '80s, after earning a Masters in English lit and another in journalism, I was horrified by the bizspeak gobbledegook I found there. It was the Age of the Mission Statement, with HR and PR departments churning out verbiage that meant nothing; that included way too much jargon and way too many words to convey ideas that weren't very interesting or compelling; or that was outright naked propaganda designed to placate restive workers who might suspect they were undervalued, underpaid and overworked. I couldn't believe any intelligent person would take that bullshit seriously.


Fast forward to today, when that kind of writing (and thinking) has crept out of the Big Biz world into so many other areas. Like, ironically - education.


With that preface, I bring you a quote from a document describing a project under way at a public high school.

The Sol LeWitt project builds off of the Domino Activity which will be the main event of Freshman Orientation in Cohort A.  The LeWitt project places an emphasis on collaboration, problem solving, and communication, while other key learning outcomes such as critical reading and research are folded into the project as students progress through various prototyping stages.   The LeWitt project is also cross-curricular and in particular, fuses together Language Arts and Math.

The LeWitt endeavor is inspired by the Design Thinking model.  Our understanding of Design Thinking is best captured by Tim Brown, CEO of IDEO.  Brown provides the following definition for design thinking:

“Design thinking is a human-centered approach to innovation that draws from the designer's toolkit to integrate the needs of people, the possibilities of technology, and the requirements for business success.”

Design thinking process is a system of overlapping spaces rather than a sequence of orderly steps or as we have started to normalize it at MHS as “loops.”  These loops are non-linear in nature, but still provide a course of action for students to follow.  The design process exists along a continuum, moving individuals, groups and or companies through three distinct phases: inspiration, ideation, and implementation. Inspiration is the problem or opportunity that motivates the search for solutions. Ideation is the process of generating, developing, and testing ideas. Implementation is the path that leads from the project stage into people’s lives.

The LeWitt project is relevant because of the value placed on process.  Even though students will produce a replica of a LeWitt Wall Drawing, the experience is more about the process of mentoring learners through what is a challenging, complex, and rigorous task.  Without embracing the key learning outcomes, students will be challenged to successfully produce a wall drawing worthy of public exhibition.

Translation: Students will work in teams to create murals in the style of artist Sol Lewitt. To do so, they must work together and follow instructions that include math.


Ironic that the description of a project designed in large part as a language arts exercise (and in fact taking the place of English classes for three weeks) uses incomprehensible jargon and language that obfuscates rather than elucidates. One hopes the kids aren't actually being taught to write like this. They're probably not. They're probably being told that this style of writing generally signals an author who is being intentionally obscure in order to inflate the importance of a project and to create the impression that a simple idea (possibly even a bad idea) is complex and profound. Let's hope.


Even though what the students are actually doing is creating artwork, it's not an art class. It's "cross-curricular," with the emphasis heavily on language arts and math - not coincidentally, the two subjects schools are most obsessed with these days because of mandated accountability measures linked to standardized testing in those areas. To the extent that the fact that this is an art project is acknowledged at all, the goal is not to learn about art, but something called  "design thinking." After all, art is about creativity. "Design thinking" is required for "business success."


I suspect that this project is an effort to address the new national Common Core Standards that call for schools to focus language arts instruction more on cross-curricular informational text. Sadly, the Common Core reflects a departure from the view that the development of intellect is a worthwhile goal in and of itself, and that well-educated individuals are capable of applying what they have learned to a wide range of endeavors, opening many doors to them. The trend instead is toward the acquisition of a narrow set of periodically tested skills and information as stepping stones to "success," defined in the most mercenary possible terms.


Here's an explanation of language arts in the Common Core:

Following on from the balance between literary and informational text in elementary grades, the Common Core pushes educators to shift that balance in middle and high school. By grade 8, middle school students should spend 55% of their time in school working with informational text. By the end of high school, students should spend 70% of their time working with informational text.Again, the aim of this emphasis on informational text is not really about technical manuals or even scientific journals. The aim is to build students’ background knowledge and vocabulary, so they are able to read and comprehend the rich variety of text that they will be confronted with in their future schooling, their careers, and their daily lives.It is critical to note that the 70% of students time in school working with informational text in high school includes the reading they are doing in history, science, the arts, and math, so English teachers should not despair. (Think about it…within a typical school day, students spend a significant amount of their time outside the English classroom.) Probably the best way to do this is to build school-level curriculum that reinforces big ideas across content areas.

In other words, teach less literature and more of the kinds of texts one needs in the business world. Literature nourishes the imagination and develops the intellect. Informational text gets you a job.


The circle is closed.

Posted by Tamar Wyschogrod at 8:00 AM No comments: