Beyonce is no Femen 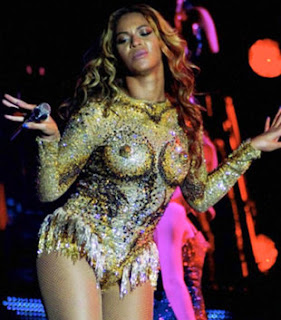 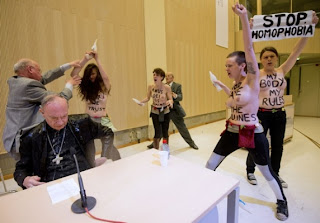 The first picture is Beyonce in concert. The second picture is an activist group called Femen spraying water on Belgian Archbishop Andre-Joseph Leonard.

I raise this point because there seems to be some confusion on the subject of sexuality, female empowerment and slut shaming.

So there’s this open letter to Michelle Obama that’s been floating around the Internet lately. It reads, in part:

When you endorse a recording artist like Beyonce, I see the most misogynistic aspects of the music industry (that prefers girls to be no more complex than dolls) interpret your comments as a seal of approval for the thoughtless cultural currency that they flood the youth market with. I’m writing because I think it’s time to stop suggesting to very young girls that ultimate feminine success – in the music industry or anywhere else – comes with the need, or the expectation for them to undress.


Just to break that down for those who might need it broken down: The writer is saying that the music industry has a history of sexualizing female artists in order to make money and sends a message to young girls that their value lies in the sex appeal of their bodies.

The writer is not making this up. In case you haven’t figured it out for yourself just from living in America, some academic types did a helpful study that clarifies the issue:

In a longitudinal content analysis of images of women and men on more than four decades of Rolling Stone magazine covers (1967–2009)...we find that sexualized images of men and women have increased, though women continue to be more frequently sexualized than men. Yet our most striking finding is the change in how women—but not men—are sexualized. Women are increasingly likely to be “hypersexualized,” but men are not. These findings not only document changes in the sexualization of men and women in popular culture over time, they also point to a narrowing of the culturally acceptable ways for “doing” femininity as presented in popular media.


Breaking that down: The music industry uses a double standard in marketing artists; “sex sells” are the bywords for marketing women far more than men; not just the amount, but the degree of sexualization of female artists has become extreme; and this reflects the culture at large.

So when Beyonce very successfully and profitably sells herself with a hypersexualized image that would fit comfortably in most R&B/hip hop/pop marketing campaigns, she sits squarely inside the trend. She is participating in and profiting from that double standard. She’s not taking power back from a male-dominated industry, she’s helping them keep it.

Yet some commentators on the open letter to Michelle Obama accuse the author of “slut shaming” for suggesting that Beyonce’s choice of concert attire sets a bad example for girls. After all, it’s her body and she shouldn’t be ashamed of it! She’s just teaching girls to be empowered and love their bodies, right?

Umm....no. Really, really no. Beyonce is not challenging the double standard. She is not defying cultural norms of female beauty or feminine sexuality. She is not encouraging young people to think outside the box. She is not making a statement of empowerment. She is not boldly rebelling against the standards of the industry of which she is a pillar. She is reinforcing them. When people seek to challenge and redefine bad cultural norms, they don’t engage in them in the exact same way they’ve been implemented all along, for the exact same purpose, with the exact same results.

The term “slut shaming” is a term that CALLS OUT people who hold a double standard on sexual morality--who treat the same behavior in women and men very differently. For example, this piece from the Huffington Post, which asked people to send in their sex education horror stories, has a really excellent example of slut shaming:

We all got a sex-ed presentation in middle school. They kept the boys and girls together because the presentation wouldn't work without boys. They had two girls holding clear cups of clean water. They then gave several boys cups of water and had them swish it around in their mouths before spitting it into one girl's cup. This was supposed to represent what sex does to you, I guess. Turns you into a nasty grimy cup of spit water. Who would ever want you when there's a sparkling virgin right over there?


As a demonstration of the dangers of multiple sex partners, this approach leaves a lot to be desired. But the choice of having the boys spit in the girls’ cups? World-class slut shaming. It’s just as problematic for boys to have multiple sex partners, but the girls didn’t spit in the boys’ cups. Perhaps this is due to a lack of imagination on the part of the gym teacher regarding the imagery of the cup. Maybe s/he could have had the kids spit on a ring pop? But I digress. The lesson is clear: Girls who sleep around are dirty sluts and no one will want them. Just the girls. Not the boys. Double standard. Slut shaming.

You can't just trot out “slut shaming” to knock down every critic who points out the problematic use of female sexuality to sell product or pander to the male audience. It doesn't mean no one is allowed to criticize sexually exploitive material anymore--even when a female performer like Beyonce is a willing participant in the exploitation. Can a person be said to be exploited when she is a willing participant? When something exploits not just the individual, but an entire group--a gender, say, or a race--then yes, an individual can be a willing participant in the exploitation of the group of which she is a member. Maybe we should be far more forgiving of the individual than of the captains of her industry, but we don’t need to hold her up as a role model, either--especially not when so much change has already occurred, and so many other paths are being pioneered.

Which brings me to the second picture above.

Not everyone is going to go to the Femen extreme. There’s room for legitimate debate as to whether one should. But no one can doubt what Femen’s message is: female nudity as a colossal FUCK YOU to the patriarchy. Beyonce’s concert get-up? Not so much.

See the difference?
Posted by Tamar Wyschogrod at 10:38 AM No comments:

Wherein I take a red pen to the NJASK

My daughter recently brought home the information guide for the middle school NJASK (for the uninitiated, that’s the New Jersey Assessment of Skills and Knowledge, the standardized test given in every public school in the state, upon which schools and now teachers’ jobs live and die). In previous years I never even glanced at the thing, but the state’s new plan to use test scores for teacher evaluation made me take a closer look.

While flipping through, I noticed that the sample reading piece was about Isaac Asimov, so of course I stopped to read it. Very quickly, the parent in me wanted to burn it. The writing teacher and editor in me wanted to take a red pen to it. I decided to let the more constructive personality win out.

It is one seriously crappy piece of writing. Granted, some of this is subjective. But while you can argue about individual criticisms, the weight of the evidence for crappiness is overwhelming. And, as my daughter pointed out, it’s being presented to kids as exemplary; something upon which they should model their own writing. That's just so very wrong.

For those not interested in deciphering my red-pen chicken scratch, here are the highlights: bad grammar, typos, jargon, passive voice, awkward phrasing, juvenile tone, clichés, ambiguous wording, and worst of all, the most interesting question in the piece is never answered. As an extra bonus, I’m including two multiple choice questions which, with my Ivy League BA and MA in English lit, and my Ivy League MS in journalism, I cannot answer with any confidence.

Click on the images below to enlarge. If they're still too small to read, try following this link. 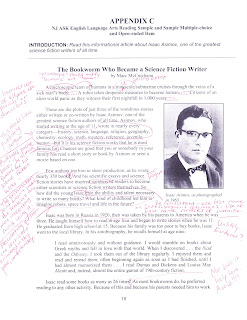 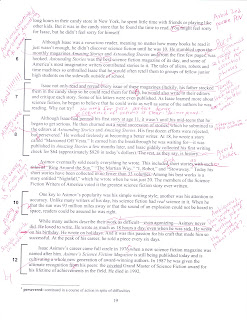 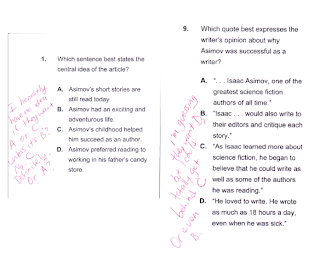 Adding: It seems I forgot to mention that the entire piece is dull as dishwater, if you'll pardon the cliché.  Would you want to run out and get your hands on some Asimov after reading this? No? But, I mean, ASIMOV!!!!!! THE BEST!!!!! Everyone knows superlatives and exclamation points add interest to any piece of writing.


My family’s public school era is coming to a close.

My youngest will be starting high school next year, and not at our town’s public high school. She’ll be joining her two older brothers at one of those “elite private schools” one reads about. You know, the places where so many politicians, wealthy philanthropists and assorted academics choose to send their kids, the implication being that those who are most vocal about what public education should be rarely choose it for their own children.

Others have already written about the difference between choosing private school precisely because it provides the education you think all children should get, and choosing private school while advocating something very different for other people’s children in public school.  Nevertheless,  there’s a certain amount of guilt that comes along with this decision. If my kids leave the public education system, don’t I lose credibility as an authentic parental voice on public education? Does my ability to afford an alternative education make me more of a dilettante than an advocate? Am I just a coward who’s fleeing instead of fighting?

I suppose those doubts will be my cross to bear. I do truly and deeply believe that the high school my kids will attend adheres to an educational philosophy that would benefit all children, and that it is possible to implement it in the public education environment. I also know that my kids only get one chance at high school. The way things are going in New Jersey, these next few years are going to see far too many negative changes in public education that would have a terrible impact directly on my kids, like more high-stakes testing; the loss of great, experienced teachers due to the insane pressures of test-based evaluation and other state mandates; and more time spent on things that make the school look good in the data game as opposed to things that actually educate kids.

Anyway, as I said before, others have gone into all that in great detail, with greater expertise than I have.

WHAT WE HOPE OUR KIDS WILL GET IN PRIVATE SCHOOL


WHAT WE REGRET OUR KIDS WILL LEAVE BEHIND IN PUBLIC SCHOOL


Sigh. Nothing is simple.
Posted by Tamar Wyschogrod at 10:45 AM 5 comments: